The progression of technological achievement in animation simply astounds. 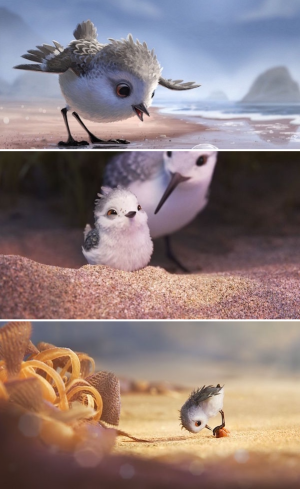 For anyone who ever went through the DVD extras on Finding Nemo, you might be aware of the level or realism Pixar achieved in trying to replicate the underwater environment, putting side-by-side comparisons of what a camera filming underwear would look like to what their animators achieved. Then they pulled back a little because that level of realism didn’t sit too well with their animated characters. Still, they gave the world of Finding Nemo a luminosity that has been evident and evolving throughout their subsequent films, hitting the incredible heights of the hyper realistic world of The Good Dinosaur.

The reason I’m bringing that up is because of the little feature that runs before Finding Dory, an animated short called Piper. Here, the world and the characters are beautifully in synch as the sandpiper birds, and baby, are rendered with incredible realistic care, while maintaining the characteristic of cartoon characters. It is gorgeous, and the little piper bound to elicit a few ‘aww’s from the audience.

The technical aspects grabbed my attention, particularly the colours; the environment between land and water; the textures of the feathers, the beach, the sky; and the incredible depth of field giving the impression of a nature documentary being filmed with a long lens, allowing for a sharply focussed subject and a hazy dream-like quality to the faraway background or near foreground. For the marriage between the technological with the story alone would warrant this little short a 5-star rating.

Now on to the main feature. 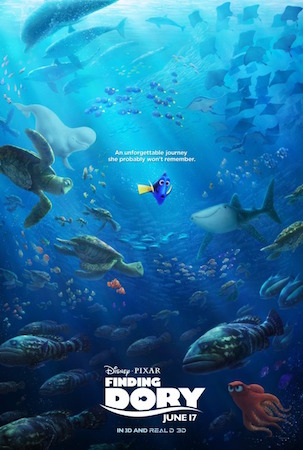 Primarily set a year after the events of Finding Nemo, this follow-up gives us some back-story to the lovable blue tang, Dory (Ellen DeGeneres), who suffers from short-term memory loss; a fact repeated constantly more likely as a reflection of people who suffer from this problem in real life. The key aspect there is ‘short-term’ because certain long-term memories begin to surface as Dory starts to remember aspects of her own past, including her parents and where she might have come from before bumping in Marlin (Albert Brooks) in the first movie. So with the help of Marlin and Nemo (Hayden Rolence), Dory sets out to find her home and her parents (Diane Keaton and Eugene Levy).

That’s the general gist, much like how the first movie was simply about Marlin in search of his son.

While the animation is gorgeous, the story feels a little like a retread of the original. What’s different is simply the new characters we meet, such as a seemingly handicapped (seven-limbed) grumpy octopus (Ed O’Neill) who’d rather be alone in a tank and away from the sea, or a short-sighted whale shark (Kaitlin Olson), or a beluga whale (Ty Burrell) with something of an inferiority complex… or is it a kind of hypochondria? It almost feels like there’s a host of psychological issues at play and how each of these characters have to adapt to their disabilities, or rediscover their true selves by partaking in Dory’s adventure. We also discover why Dory is capable of certain skills, like talking whale, or reading words.

Unlike the preceding Piper, the animation design slips to match Finding Nemo, albeit with improved visuals and some very nifty tricks involving the octopus, Hank. The world is less about the ocean but more within the confines of the Marine Biology Institute and it’s many areas that are traversed by our characters. The cast do well, and while some of the story seems reflective of its predecessor and the emotional core working effectively enough what excels here are some of the action beats, particularly the finale which is taken to some imaginatively ludicrous and hilarious heights.

Still, it’s all in the journey here, more than its resolution. With the cast of characters supplying much of the charm, it’s hard to find anything to truly complain about (which also can be found, but that’s beside the point of the movie), giving us a final line apropos of the film. And stick around for a post credits scene.

Revisiting some #retro #SciFi giving my #FlashGordon Conquers the Universe #DVD a run... can’t say it’s holding up on a HDScreen. Wonder if they’ll restore this one someday.
Just a minute of the celebrations that have been going on a while (and it’s not midnight yet). Likely to go in for the next half hour or more. It’s the #9thDayLunarNewYear #9thDayCNY A bigger celebration than the first day in #Penang.
Its getting #hotanddry #hotdays #hotdays☀️ #hotsunnyday till the leaves have no chance #tree #leafless #drytree #bluesky #clouds #penang
It's #TheUpShot of a #LightingFixture at #nagoyajapaneserestaurant at #UdiniSquare #lighting #lights #decor #Spheres #SphereLights